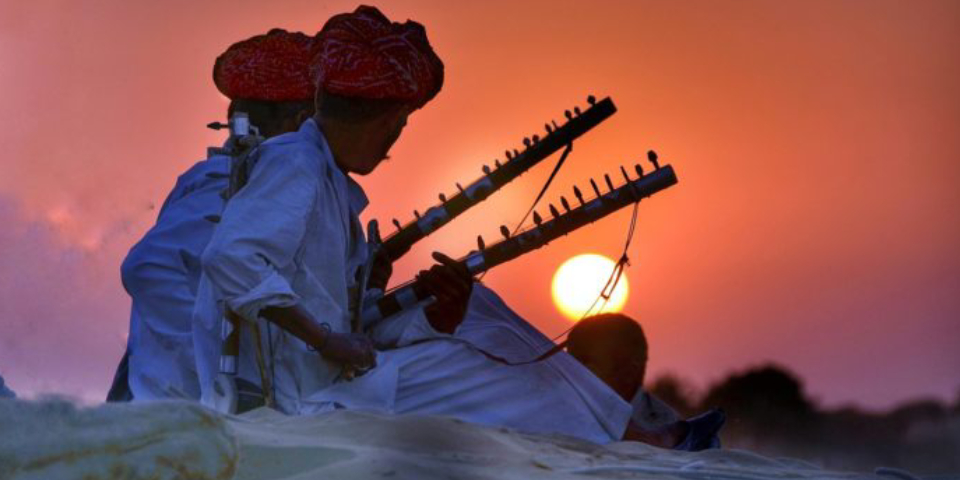 With no known authentic origin, folk music is part of the culture for people across the country. India being rich in cultural diversity, folk music is also diverse, and it is said that almost every region of India owns its variety of folk music. In short, Folk music reflects the way of life. From the peppy Bhangra to Mappila Paattu of Kerala, the traditional folk music shares with the music lovers the essence of life in a language known to them. The language may be the reason why folk music is intimate for a particular region. The article takes you through a short tour of the Indian Folk music from various regions.

The folk music is known to be passed on to generations orally, with no known authors or scriptures associated with it. Many songs are closely associated with farming and other local professions, which were evolved to break the monotony of routine life. The rendering not only provided them with much-needed enthusiasm, but these songs also represented emotions. It is interesting to note that India’s rich culture is incomplete without the traditional folk music for any festivals and celebrations despite the rise of many popular songs.

Although it is a known fact that folk music is associated with the recreational aspects of a culture, there are many other reasons why folk music was transmitted over generations. Let us look at the various elements that could have been the reason why folk music has survived centuries

The recreation factor is the first reason why folk music is so popular with people today. The folk music gives the region their own identity, given the intense usage of raw, colloquial language and the contents that are solely dependent on the culture. The folk genre is used extensively to celebrate special events that include wedding, childbirth, festivals, harvests, narrating folk tales, and many more.

Know More About : Traditional Indian folk singers of all time

It is interesting to note that folk music content is closely associated with the daily lives of the people. Since the history of the folk art forms dates back to centuries, the purpose would have remained the same. People passed on the information to generations unintentionally through their music. Though there is no written literature to justify the details mentioned above, it is assumed that the folk songs passed down much information through the songs before the introduction of papers.

Folk songs were the primary medium for socio-religious reforms in olden days. Great leaders like Adi Shankaracharya used folk songs to preach his teachings. The songs sung by the famous religious leaders also gave a distinct identity to the villages they came from. Gradually, these songs have become associated with a particular area where people celebrate and cherish them.

Folk songs are traditionally associated with dance forms that are performed while singing these songs. Almost all Indian states are associated with a folk song and its dance, of its own. Some of the folk songs associated with different states are Bhangra of Punjab, Pandavani of Chattisgarh, Mappila Paattu of Kerala, Naatupura Paattu of Tamil Nadu, Garba of Gujarat, and Sohar of Bihar. These are just a few songs, but there are still umpteen folk art forms all over India.

In an attempt to revive and preserve our culture, folk music/tribal music is being taught online nowadays. Experienced and some of the best folk singers are offering their expert guidance to the students who are willing to take up the classes. Let us preserve these great art forms in whatever way we can and encourage the younger generations to take up the folk music classes.